When I became a Jira administrator, the most confusing part of project administration was how screens, screen schemes, and issue type screen schemes worked together. Huh? All I wanted to do was to change a few fields around and instead, I found myself lost in a confusing combination of settings that didn’t make any sense to me. Shouldn’t it be easier? Once I understood the relationship however, I saw how powerful these settings are when they work together. Let’s start out with some simple definitions.

Screens define which fields are present and their display order. Jira Server and Jira Cloud “Classic” projects have four types of screens. They are:

Image: A transition screen’s name is signified with “(T)”

You can have one screen, or one set of screens, for all issues in your project. Or you can have different screens for each issue type. We’ll talk more about that in the “Issue Type Screen Scheme” section below.

Image: The “Start Date” field is empty, but displayed in a Jira Cloud “Next-gen” project

In all versions of Jira, screens display both standard and custom fields. Some fields can be ordered as desired by rearranging them on the admin view of the screen. Other fields are automatically placed and grouped together. For example, all user-picker fields (“Assignee”, “Reporter”, etc) appear together on the right side of an issue’s screen. All date fields (“Due Date”, “Created Date”, “Updated Date”) also appear together on the right.

Jira Server and Jira Cloud “Classic” projects have Screen Schemes.
Remember the “create”, “edit”, and “view” operations above? This scheme associates one or more screens with an operation.

In this simple example, there’s one screen for each operation.

A Screen Scheme can have as little as one screen shared by all operations or as many as three screens, with one screen for each operation.

I recommend starting with one screen shared by the “create”, “edit”, and “view” operations in your project. If that screen becomes cluttered with too many fields, or if information needs to be collected during different stages of the workflow, then consider using multiple screens.

Screens, Screen Schemes, and Issue Type Screen Schemes work together to power your project. Atlassian explains this relationship in this diagram.

It look me a long time to understand these concepts. I recommend you re-read this article and experiment in your own Jira test environment, until the relationship between these settings is clear.

Request forms provide a simpler and streamlined issue view, which is great for less technical audiences. Customers need no Jira knowledge to use the portal to submit their request. 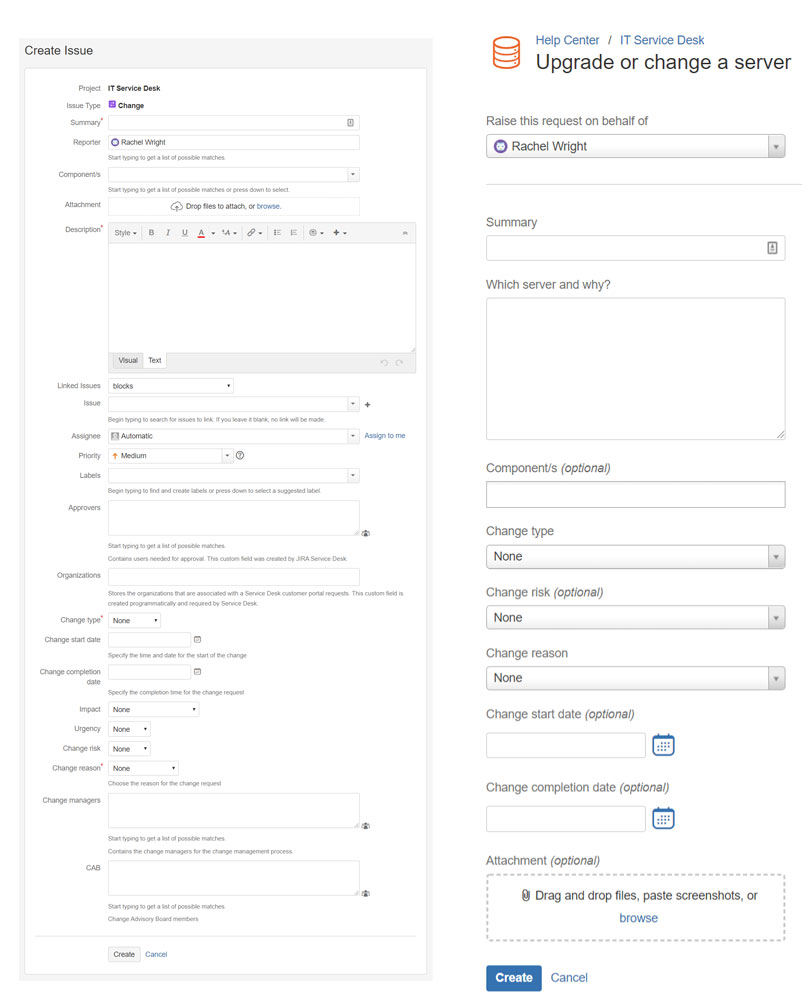 Make your screens and schemes as easy, efficient, and reusable as possible. Here are some recommendations:

As With all Forms

Other articles in this series: